Jerry Beagley was named 2017 Alumni of the Year

Jerry Beagley was named the  2017 National Intercollegiate Rodeo Association Alumni of the Year by the members of the NIRA Alumni, Inc. during the June 16 performance of the College National Finals Rodeo in Casper, WY.

Beagley was the 1977 NIRA Champion Bull Rider, a member of the Championship Men’s Team in ’77 and the CNFR All Around Cowboy the same year. He has been a long standing member and scholarship contributor of the NIRA Alumni, Inc.

He was instrumental in teaming up with R.E. and Martha Josey to award a $500 scholarship to each of the four go round winners in the barrel racing at the CNFR. The total award contribution in 2017 was $2,000 and it will continue for 2018.

Since the early 80’s. Martha and Jerry Beagley have combined their talents to make and sell the Martha Josey Knot Rein.

“We have been taught that when much has been given to you, much is expected of you.  I have been blessed in so many ways and would not have gone back to college if it had not been for college rodeo and the scholarships that allowed my generation of cowboys and cowgirls to attend school,” stated Beagley.

He continued, “If we have the ability to help our youth stay in college through scholarships, then 20 years from now , they will be able to aide other students with the same benefits.”

Jerry is the father of two children and he has two grandchildren. He is the owner of Jerry Beagley Braiding Company  and Tack Supply.

In his spare time, he and his wife, Christine travel abroad visiting different countries and experiencing each one’s uniqueness. If you ever get a chance to visit with him, he can tell you interesting stories about his travels. This could be another feature story for another issue of Rodeo News.

The former NIRA Champion stated. “I am at the point of my life, it is my turn to give back, and it makes me feel good.” 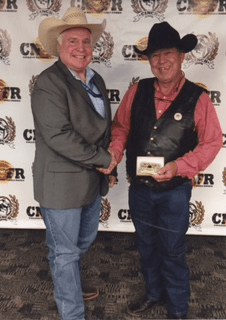 Merrill Ellis was named the 2017 NIRA Alumni, Inc. Outstanding Contributor June 17 at the NIRA Foundation Luncheon held in conjunction with the College National Finals Rodeo in Casper, WY. Merrill was a member of the Eastern New Mexico University Rodeo Team. Her former ENMU rodeo coach, Charles Chambers was a previous recipient. She was presented with a bronze trophy for he contributions. (Photo by Barbara Hintz, NIRA Alumni, Inc. Member and the 1967 NIRA All Around Cowgirl)