Ken Adams is the 2016 Alumnus of Year

“I just wanted to come up with a way to help college rodeo kids stay in school and I had a list of Bull Riding Champions from the year the Alumni invited all the National Champions from every event to come to the College Finals for a reunion.  I started calling the ones we had contact information on and asking them to donate to a scholarship for the bull riding rookie. We would talk a little bull riding and what college rodeo had been like for them.  All the ones I called were interested and made a donation. The NIRA Alumni needs more members to be a big enough organization to make a difference and I thought this would be a good way to get past contestants to reconnect.”

That is how Ken Adams, 2016 Alumnus of Year, started the “Event Rookies” awards. That was in 2014.  He hoped the idea would spread and other alumni would pick up the challenge and work toward scholarships for their favorite event.  The Alumni board decided if it was good enough for the bull riders there should be a rookie award in every event and made it so in 2015 and 2016!

“Since the award has been funded by past champions and all past NIRA bull riders, I thought it might be more meaningful to the winner,” says Adams.  He adds, “To all those past contestants and bull riding fans I haven’t been able to contact, if you want to participate, you can so for the price of a tank of gas!  Call me! And if you want to donate to one of those other events that is okay too.”

The awards follow the guidelines set up in 1992 when the NIRA Alumni was founded.  Their awards go to rookies but they can’t collect until they register for the next semester of college.  The alumni want to reward good rodeo performances and encourage continuing education and the computer at the CNFR determines the winner!

Adams, 1957 NIRA National Champion Bull Rider, is a graduate of Arizona State University with a degree in Animal Science.  He joined the Alumni in 1997 and served as Alumni president from 1999 until 2002 and has been on the Board of Directors since then. He and his wife Sharon live in Phoenix.  They have a son and daughter and two grandsons. 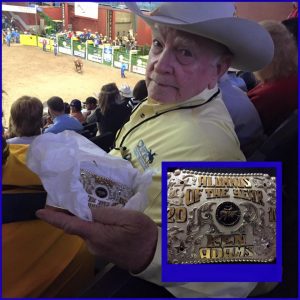